Get translation services in Manchester, or anywhere else in the UK, from one of the UK’s few ISO 9001 and ISO 17100-accredited translation companies.

Source sector-specific expertise in both written and spoken translation services. With interpreters and specialist translators covering every global industry and over 200 languages, you will always get just the kind of language support you need.

Find out more about using us today. Begin by discussing your requirements with your personal account manager and get a free quote with zero obligation

You might require a one-off document translation. You may want to localise your business’s website for 20 different foreign markets.

Whatever your goals, we use our expertise to match you with the most suitable language experts for the job. Use our interpreting and translation services to benefit from:

Get translation services for your part of Manchester

From the university where Ernest Rutherford split the atom to two internationally-renowned football teams to a thriving Chinatown district, Manchester is home to businesses in every sector and globally-renowned enterprises and institutions.

Covering Salford, Stockport, Tameside and Trafford as well as the central City of Manchester, we deliver our local translation services online. Safely. Securely. And with swift responses from your personal account manager regarding any subject or query.

With commercial clients including brands like Marks & Spencer, the BBC and many others, we’re the go-to choice for thousands of businesses when they need:

Find the ideal interpreting service for your assignment

From international conferences to medical appointments to legal proceedings. There are many reasons why you might require an interpreter in Manchester, across the UK or around the world.

No matter what your interpreting needs are, our global network is here to help. Our certified interpreting services allow you to quickly and easily source highly trained and experienced:

You will always get the most suitable professional for your assignment, with experts in both consecutive and simultaneous interpreting readily available.

Consecutive interpreting is often a more suitable option for small group settings such as meetings or medical appointments.

Simultaneous interpreting is often used for large-scale, live events such as conferences, negotiations or news broadcasts.

Match your Manchester project with a subject matter specialist

The best way to ensure your project accurately conveys your message to your target market is to use translators and interpreters who know almost as much about your field as you do.

Be it medicine or business. Academia or marketing. We always pair your project with linguists who are specialists in your field, with matching qualifications and/ or experience.

Whether you need high-quality translation services in Manchester to localise your advertising for international markets, to translate mission-critical documents or even localise audio or video content, we always find you the right expert for the job.

Manchester – facts and things to know 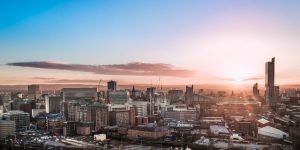 Manchester is located in the north of England, southwest of the Pennines and to the north of the Cheshire Plain.

What are Manchester’s historic industries?

Manchester is usually best known historically as one of the main centres around which the Industrial Revolution took place. But there have been settlements on the site since the first century CE.

The growth of the city from a small rural town to so-called “Warehouse City” up to and during the 19th century was driven by the cotton trade and textile manufacture in general. It was eventually dubbed “Cottonopolis” by the Victorians for the sheer vigour of the local cotton industry.

Manchester became the world’s first truly industrialised city. Though cotton was its first and remained the greatest sector of its economy for many decades, a vast array of other industries, engineering firms, chemical manufacturers, financial services, and more all contributed to Manchester’s meteoric rise in size and fame.

How big is Manchester?

Manchester has a population of nearly 550 000, making it the fifth-largest city in the UK. It is the heart of the Greater Manchester Built-up Area, a large conurbation with a combined population of 2.7 million.

Before the 1900s, the parts of what is now Manchester that were south of the River Mersey were accounted part of Cheshire. In the 20th century, they were incorporated into the larger city.

What is Manchester famous for?

Manchester is a city that is famous around the world. Though its two most internationally famous exports today aren’t any kind of manufactured goods. They come in the form of sports, music, and culture.

Manchester United is perhaps the most famous professional football team in the world. The club’s stadium, Old Trafford, is the largest football stadium in the UK and the 11th-largest in Europe. The city is also home to another internationally famous football club, Manchester City, which plays at the City of Manchester Stadium.

Musically, groups like Oasis, The Smiths, Joy Division, Take That, and many others have hailed from Manchester and taken their music around the world. The city is also known for its thriving nightlife and club scene.

As you might expect from a city that has been both a titan of industry and culture, numerous historic events have happened in and around Manchester. The atom was first split by Ernest Rutherford in Manchester in 1917 and the world’s first stored computer program was created here in 1948.