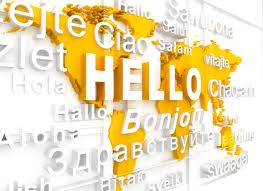 Do you use translation services for marketing copy, websites, apps, manuals, etc? Are you a marketer involved with international projects? Are you aware of how text contraction/expansion can impact you?

Translating between languages always involves text expansion/contraction, i.e. the target text will often involve more or less characters, words and/or space. For marketers, graphic designers and website developers this brings certain challenges, especially if they are inexperienced at multilingual projects. What happens when a German translation can’t fit into the space allotted for it? How does a web designer suddenly deal with lots of white space? How does a typesetter account for more words than he/she has space for?

This article offers a quick overview of how text expansion/contraction works and therefore how people can manage its impact on their business.

Firstly, the length of a translation may vary a lot depending on a) the language b) the text type (technical, legal, literary) and c) translator’s particular writing style. So there are many variables that impact text length; it’s not just down to the language.

The following figures are indications but as a general rule most languages take up more space in translation than a source text in English: For example, when translating English into French or Spanish the translation will generally be about 15 % to 30 %  longer than the original. For German or Dutch it can even be up to 35 % or more.  Technical texts, especially about mathematics, physics or also about legal or economical issues, usually extend a translation much less than, say a literary translation.

Below you can find detailed indications for translations from English into French. Average extensions in length for this language combination according to topic are:

Exemplary rates for other European languages are as follows:

Differences not only exist in phrase length but also in the length of individual words. Some languages such as Finnish, German and Dutch, create single large compound words to replace a sequence of smaller words. Accordingly, the English “Input processing features” may become “Eingabeverarbeitungsfunktionen” in German. Whereas the English text can easily be written into two lines where there is restricted width available, e.g. in a form entry field, a series of tabs or buttons or in narrow columns, the German may not be separable easily and may pose serious challenges to your layout.

Also consider that some abbreviations you are using in your own (source) language may not exist in other languages and must thus be spelled out in full length in a translation.

Other graphical problems may occur if scripts of another language take up more space than the letters of the Latin alphabet. Chinese, Japanese and Korean, amongst others, are scripts that typically consist of more complicated characters than those of the Latin script. This can mean that even if the number of characters in translation remains the same, or even slightly decreases, the horizontal space required may be larger all the same. For example, the English “desktop” becomes “デスクトップ” in Japanese. The Japanese has one character less but will typically take up much more horizontal space.

Vertical expansion can also increase in translation as character height or space between lines often has to be greater, e.g. in many Asian scripts. Without proper buffers, text can become so crowded that documents may be difficult to read, even when going into Asian languages like Chinese where text length contracts, but character height must be greater than in English.

Similarly, smaller translations can be just as problematic as bigger ones because they might leave too much white space. Flexible layouts are thus a good investment in every case.

For most languages, it is generally safe to prepare for as much as 25%-35% expansion (or contraction if you are translating from another language into English for example). However, actual expansion percentages vary depending on subject matter, writing style, and sentence or string length. Very short strings of text (such as single words or abbreviations) may expand as much as 100%-300% in length. Longer passages will often expand at the following approximate rates:

Again, actual expansion percentages vary, so the numbers above are rough approximations for somewhat typical expansion and contraction.

You should keep these differences in mind when you want to have a text translated; layout and similar issues can become more complicated in another language.

Written and researched by Yvonne Seger and Aelaig Yvet