By its very nature, translation is about communicating. It facilitates communication of words, sentences and ideas, not just between people but sometimes between nations themselves. How does the nature of these international dialogues impact the translation market and especially jobs for translators?

How closely are the relationships, politics and economies of different nations linked to the language pairs most commonly translated in each one and between them?

I was curious to find out just how useful a good knowledge of international relations can be to a translator; so I searched job-hunting websites in France, Germany and the U.K. for translation jobs and noted the language pairs advertised in each country.

The results showed a strong correlation between the economic relationships between these three nations and the translation jobs available in the relevant language pairs.

We’ll start with France and Germany.

Bruce Stokes points out that these two major European powers are drifting apart both ideologically and economically – he highlights attitudes in the two countries towards the E.U. and shows growing contrasts in their respective priorities, with unemployment being a major concern for 80% of French people, while in Germany only three in ten people consider this to be a major issue. At the same time, Stephanie Flanders notes that the U.K. has recently overtaken France to become Germany’s most major trading partner, as France is slowly edged out of the equation.

It may come as no surprise then, given this recent divergence in French and German ways of thinking and the shift in the latter’s economic priorities, that Germany has more work available for language pairs with English than with French. However, the extent of this preference for English in the German market is truly impressive.

As shown in the chart, English is more than just the most sought-after source and target language in Germany: it is the only one. 100% of all translation work I found advertised in Germany was for translations between English and German, revealing perhaps just how powerful this link is between economic and political dialogues between nations and the sort of translation work available there. What this information effectively does for translators is to push home the importance of not only understanding (in this case) German and English, but also understanding Germany and the U.K. and their political and economic relationship with each other, in order to know where the translation work is available and how to become a part of it.

A similar though less pronounced trend can be found in the data for the U.K. Over half of all translation work on offer is between English and German, reinforcing the strong link between Germany and the U.K. However, a considerable portion of jobs in the U.K. do involve French, and English is the most common language pair in France too, suggesting a steadier linguistic link between these two nations. 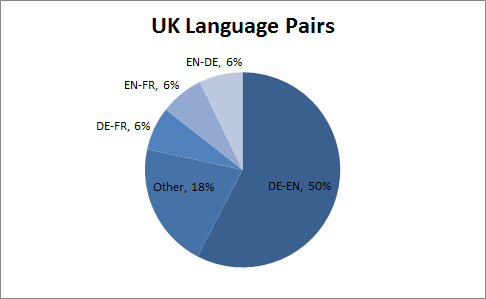 Jonathan Fenby’s article for the Guardian outlines in clear terms the unique relationship between these two nations, which clash in many ways but remain steady friends and allies despite their differences. From a political standpoint, the two nations have had a lot to squabble about over the years, from rocky politics during World War II to disagreements over policy in the E.U., but as Fenby notes, the numbers of British expatriates living in France and of French nationals in the U.K. remain high because of a deep-seated respect and co-operation between the two countries, which explains why there always seems to be a fairly significant flow of translation work between these languages.

Lastly, in the global chart, which omits the ‘Other’ category and includes only translations between English, French and German, we have a clearer view of how the three official languages of the E.U. interact overall.

We can also see that English is involved in 91% of all translations, German in 75% and French in only 33%. This reflects a wider climate in which not only are German and English both, according to different standards, the most widely-spoken languages in the U.K. (German being the most common mother tongue, and English the most widely understood as a native or acquired language); but where France is being increasingly pushed out of the dialogue between these three nations.

This information is not surprising, as a relationship between politics, economics and language is inevitable. But it does go to demonstrate once again that the value of an understanding global dialogues and interactions should not be underestimated; and neither should the importance of translators and translation providers, whether freelancers or LSPs, to the international business market.

Researched and written by Megan Currie for the Culture Vulture.