The Internet is changing our Language

Have you heard of Chinglish? Spanglish? Hinglish? Whether you know it or not, the internet is creating a great deal of new forms of English which all have their own peculiarities.

All languages evolve over time; words disappear from our vocabularies, neologisms are coined and some words change their spelling or pronunciation.

The creation of the Webster Dictionary is a good example of the evolution of a language. In 1814, Noah Webster felt a common language would help to unite the people of America and would increase their independence from Great Britain. In this dictionary, a new spelling was adopted for certain words – the u was dropped from words such as colour and the lonesome traveller now only had one l to help him through the cold, dark night – and new words were included that described quintessential American phenomena. It took Webster 18 years to complete the dictionary, which in the end consisted of 70,000 entries.

At the moment, the English language is again going through some changes. These changes are occurring because of the internet and are happening at a much faster speed than the changes that were made in the Webster Dictionary. Even though the predominant language of the internet currently is Chinese, some linguists believe English will be the most common language on the web in 10 years. The kind of English that will be displayed on web pages, however, will be very different from the language we write today. 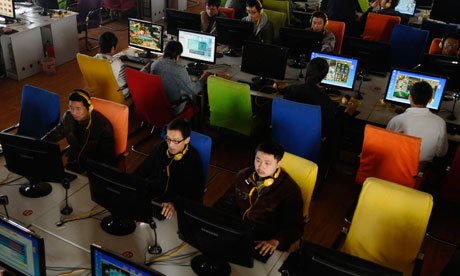 The reason for this? The BBC says that the majority of the people who write English content on the internet are not native speakers. The internet is a great place to communicate with other non-native speakers of English, as nobody cares about your foreign accent and spelling mistakes there.

Facebook has already jumped on the language bandwagon: great deal of new English varieties, such as Spanglish (Spanish-English) and Konglish (Korean English), can already be used on the social network site. Naomi Baron, professor of linguistics at American University in Washington DC, states: ‘If you can talk Facebook into putting up pages, you have a language that has political and social standing even if it doesn’t have much in the way of linguistic uniqueness.’

These ‘new Englishes’ use the standard English language in a very creative way. Some words change meaning (‘blur’ in Singaporean English means ‘confused’ or ‘slow’), while others are combined to create new words.

An example of this can be found in Konglish, which for example coined the word ‘skinship’ to describe intimate physical contact. Robert Munro, a computational linguist and head of Idibon, a California-based language technology company, believes that English is so popular because it has a ‘special commercial and social role’ as it is used by modern forms of entertainment. Munro: ‘People think it’s the language of the digital age.’
In previous times, the need for a common language resulted in pidgin, a communication means with a very easy grammatical structure. When new words and grammar rules were added, pidgin could evolve in an actual Creole language. This could happen with the English that is used on the internet as well. The Hinglish language is a good example of this. Hinglish is composed of Hindi, Punjabi, Urdu and English. The name seems to indicate that it is simply another variety of English, but this is not the case. The language is so widespread that it is even taught to English diplomats! The language features many neologisms, such as ‘eve-teasing’ for sexual harassment and ‘pre-pone,’ as opposed to postpone, which means ‘to bring something forward.’

Internet is becoming increasingly important in our everyday life, enabling languages to blossom and evolve. According to Munro, English might be the world’s lingua franca, but this does not mean that the language is used at the expense of others. In fact, these other languages slowly trickle down into English, creating new gems in the process.