Russia, The Crimea and The Ukrainian Language Debate

Russia has annexed the Crimea region from Ukraine claiming the Russian-speaking population were under threat. Using language as a political tool is no new thing; however, the debate over Ukrainian being a distinct language or a dialect of Russian is heating up.

In her article on the website of The Boston Globe, Britt Peterson, explores the subject, taking a closer look at the Ukrainian language.

Peterson gives account of a number of long-forgotten statements about the Ukrainian language made by famous Russians that have been circulating online. In the past, many Russians referred to the language as “Little Russian.”

Czar Nicholas II, for example, once stated that there “is no Ukrainian language, just illiterate peasants speaking Little Russian.”

While Peterson admits that the line between language and dialect is not clear-cut, she states that most linguists believe Russian and Ukrainian to be two different languages.

In fact, she says the Russian and Ukrainian lexicon differ by 38%, which is more than between Spanish and Italian.

Scholars generally agree that Russian, Ukrainian and Belarusian all have their roots in Old East Slavic, but that they split off from this language thousand years ago. Peterson says that Russian linguists, however, believe East Slavic to be a form of Russian, which means Ukrainian and Belarusian aren’t sister languages of Russian, but rather daughter languages.

This is also visible from the Russian word for old East Slavic, “drevnerusskiy yazyk,” which means “Old Russian.” Russian has long tried to wipe out the Ukrainian language – it even banned its official use in 1876 – but has never succeeded in this. In fact, Ukrainian linguist Andriy Danylenko claims that in the 17th Century, the Russian language took words from Poland and Ukraine, as these countries had more ties with Europe. According to Peterson, this again happened in the 19th century, when a cultural revival hit Ukraine.

After the first Russian Revolution, Peterson says, the ban on Ukrainian was lifted in 1905. Moreover, she says there was even a period of “Ukrainization” after the Second Revolution when the first Ukrainian dictionaries were issued and a standard language was created. In his book “Russia and Ukraine: Literature and the Discourse of Empire from Napoleonic to Postcolonial Times,” Myroslav Shkandrij states that during that time, a portion of the Russian people looked with “patronizing admiration” to the language and believed it to be an archaic, proto-Russian language. In the 1920s and 30s, however, Stalin imposed the Russian language on the Ukrainian one and for example rewrote dictionaries to incorporate Russian words in it.

Peterson says that you can still hear the linguistic and demographic oppression the Ukrainian language has faced in the language as it is today.

Most Ukrainians are bilingual and even though Ukrainian has been the official language since its independence 25 years ago, Russian is still seen as more prestigious.

In fact, many Ukrainians speak “surzhyk,” a Russian hybrid language, at home. The Soviet’s Russification, Peterson says, has brought the Russian and Ukrainian languages closer together. However, she says that even though many Russians claim to understand the language to confirm its inferior status, Vladimir Putin was in need of a translator when he spoke to Prime Minister Yuschenko. 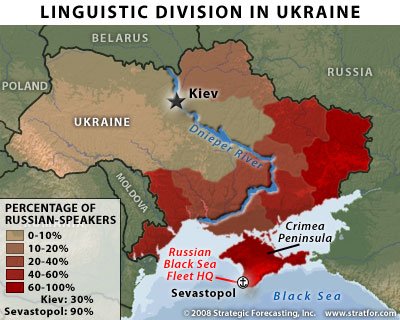 [Image from The Politikal Blog]

Peterson believes that lately, the Russian government has adopted a rather strange view on the Ukrainian language: annexing the Crimea region seems to say they believe Russian is separate enough from Ukrainian to be in need of defending.

When the new Ukrainian Parliament prevented Russian from becoming and official language in certain parts of the country in February, Peterson says, Putin wasted no time and said this was discrimination. The threat to the Russian speaking people in the Crimea even was the reason for Russia to invade the region, she says. And here, she believes the country is repeating the past: the Russians again took a decision based a useful, fictional scenario instead of linguistic facts.