A children’s book containing offensive language has caused quite the stir in Germany. Telegraph journalist Felicity Capon tried to decide whether revision should be required for these kinds of books or not.

German Publiser Thienemann, one of the oldest in country, apparently thinks revision is an appropriate practice says The Telegraph article. After a letter of complaint from a concerned father, the publishinger decided to revise the text in the children’s book Die Kleine Hexe (The Little Witch). Mekonnen Mesghena wrote to the publishers that he did not feel comfortable reading the book to his daughter, who is seven.

The offending language Mesghena complained about can be found in a passage where two children dress themselves as ‘neger,’ the German word for both negro and nigger. The book, a bestseller since its release in 1957, was altered after a consultation with its author, Otfried Preussler.

Not everyone in Germany is pleased with this action:  the New Yorker has reported that literary critic Denis Scheck painted his face black to make a statement. He believes children’s books that stem from a different era should not be rewritten. 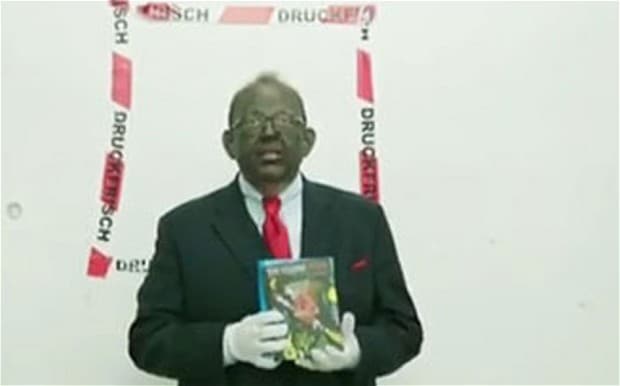 Scheck’s belief is shared by many. In fact, a great deal of the German press accuses Thienemann of censorship. Die Zeit even claimed that ‘a furore of political correctness is spreading over the land.’ However, the magazine received a reply from nine-year-old Ishema Kane, who explained the impact of racist language. She wrote: ‘You cannot imagine how I feel when I have to read or hear that word. It is simply very, very terrible. My father is not a ‘Neger’, nor am I.’

These examples show that opinions about rewriting offensive language in old children’s book vary greatly. It is not the first time that the subject is discussed; in 2007, legal proceedings were launched by a Congolese citizen about Tintin in Congo, a book that he felt broke racism laws. The ‘Negro King’ in Pippi Longstocking was changed to the ‘South Sea King’ in 2011 and Willie Wonka, written by Roald Dahl was revised complaints were made about the racist connotations that can be found in the Oompa Loompa characters.
Those who are in favour of maintaining elements in children’s books that are now regarded as offending often say that altering the source text achieves the opposite of what people want. Gundel Mattenklott, professor at the Free University of Berlin: ‘You can’t act like the past didn’t exist.’ She continues: ‘Take the anti-Semitic children’s books of the Thirties. Today we use those for scholarly research.’

However, Capon believes children’s books are meant for children, not for scholarly research. She thinks books ‘should fill children with hope and assure them that they belong in a society which values them. Children don’t look at books with a critical eye but accept their contents without asking questions. According to Capon children can only be hurt by content that gives them a bad feeling.

Children have enough time to be exposed to offensive language later on in life. Capon gives the example of Quentin Tarantino’s new film Django Unchained, which employs racist language, but is meant to be watched by adults that can make up for themselves whether this language serves a greater purpose or not.

In conclusion, Capon believes the original versions of children’s books should be kept to show how attitudes have changed in the past few decades. However, for the contemporary child, it can do nothing but harm.