The management of a Domino’s Pizza shop in Preston no longer allows its employees to speak their own language; from now on, all conversations must be held in English. How do you feel about multilingualism at the workplace?

Recently, a sign placed in the staff area of the Domino’s Pizza shop located in Preston caused a great disturbance among the staff members working there. In fact, an article published on the BBC News website, states that one of the employees even resigned because of it. So what exactly did this sign say?

Well, it stated that all staff members should speak English only and could face disciplinary actions if they did not follow this rule. The reason for this measure is that the management felt speaking foreign languages on the work floor could be regarded as harassment or bullying. This might be true in some cases, but many employees did not agree with the tone of the message, the BBC says. 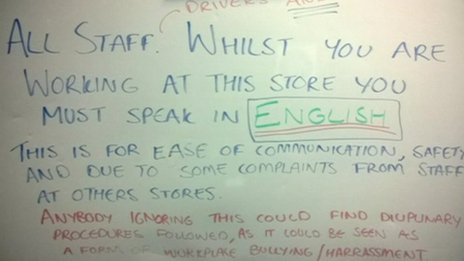 One of the employees that took offense to the sign was Stuart Horton. Horton has worked for the pizza chain for five years as a delivery driver, but according to the BBC, he decided to quit his job after the sign was put up. He is not the only one who felt the sign was rude, he says, as his friends, who are from foreign countries such as India, Poland and Hungary were also offended by it.

Lynn Collins, who is a regional secretary for the North West Trade Union Congress, sides with Horton on the matter. The management of Domino’s Pizza knew some of their staff was multi-lingual when they hired them, she says. In addition, she feels it is a great shame that the store is unable to use this multi-lingualism to their advantage.

Domino’s Pizza also made a statement about the sign, the BBC says.

:: The pizza chain believed one common language is needed to ensure smooth communication among their staff because it avoids confusion and creates a welcoming atmosphere.

Moreover, all employees must speak the same language in order to achieve a safe working environment. According to the BBC, Domino’s did agree that tone the message could have been a little less strong, though, and will discuss the matter with the Preston franchise.

How do you feel about speaking foreign languages on the work floor? Do you agree with Domino’s view that one common language is vital for a good working environment or do you believe all employees must be able to speak the language of their preference?