The recent retirement of Sir Alex Ferguson has seen thousands of words written on his management style and techniques. Many attributed his success to being a canny man manager, others his work ethic and others to his abilities as a cross cultural manager, i.e. having large numbers of foreign stars and being able to keep them all performing.

We decided to do some research into the last point – his cross cultural management skills and to see whether it was indeed the foreign element of his team and his ability to manage them well that led to success.

In terms of good all round cross cultural management, we believe Sir Alex Ferguson has left the perfect blueprint for others to follow.

In his 26 years at Old Trafford the former Glasgow Rangers striker has brought some world class international players into the ‘Theatre of Dreams’. Certainly from the onset of the Premier League in 1992 when the floodgates opened to foreign players looking to ply their trade here, it was clear many big global names would wear the famous red jersey.

Many look back in the belief foreign players have dominated United’s relentless march to success.

Our research has revealed much about the fervent Scot’s recipe for capturing a plethora of silverware across a quarter of a century.

You may be surprised to learn more than 60% of the players signed under his reign were either from England or the rest of the UK, i.e. British. Of those signed from foreign shores both French and Dutch players seemed to be dominant, though it’s clear Scandinavia also proved to be a happy hunting ground.

Ferguson’s signings actually span 36 countries including China, Angola, Australia, Japan and South Korea. This gives credence to United as a world brand also recognising if you have talent, then there are no barriers at Old Trafford. But our statistical research revealed much more about his long term managerial strategy.

Players from the UK generally carried  impressive longevity, and in fact half a dozen stars brought through the ranks had more than 100 years between them in terms of service. This truly staggering statistic of course points to his team of youngsters who carried off the Premier League title.

The very best foreign players tended to have a longer career, and those who either couldn’t cut it consistently or fell foul of the manager didn’t tend to stay long in Manchester.

More than 170 players played one game or more for United under his supervision, and of those more than 70 were English. There is little doubt however this mercurial manager was astute enough to capture the skills of some of the world’s best from Eric Cantona to Christiano Ronaldo, Ruud Van Nistelrooy to Peter Schmeichal. In the case of Ronaldo, the club also made a breathtaking profit when they sold him on to Real Madrid. 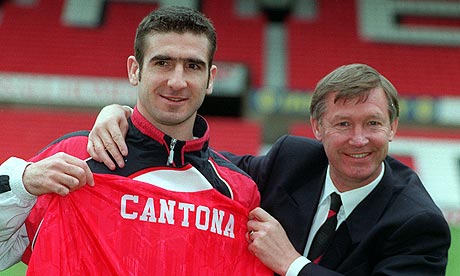 This pattern features heavily over the years even involving young players who featured in the first team no more than half a dozen times, but who went on to have successful careers at other clubs. The business side of the club therefore, benefited greatly from his managerial approach.

The wonderful thing about the Ferguson strategy is how the whole footballing ethos of the club was balanced perfectly against the need to man manage some big names on the footballing stage.

He carried on the traditions of ‘no one man is bigger than the club’. When Beckham was moved on to Real Madrid it was clear that brand Beckham had begun to compromise the ambitions of the team. When Jaap Stam criticised the club in his book while still playing for United, he was shipped out in a matter of days regardless of his talent.

So to look at the real essence of Fergie’s management style a number of clear strategies emerge.

The tradition of United’s youth policy founded on the beliefs of the late Sir Matt Busby has been carried on. So many of his best players like Giggs, Scholes and Beckham came through the ranks. The Scotsman who came from a family of shipyard workers believed in a good work ethic, and this was reflected in his choice of UK players who were given a new sense of discipline and professionalism.

It seems clear also if the British approach to playing the game was married to the very best foreign flair in carefully balanced numbers, then you have a winning formula. In short there were never too many foreign players in any one United side, and this has to be a lesson to those who simply pack their teams (whether footballing or business) with players from abroad. Fergie looked to create a complete hard working unit carrying great skill and flair at the same time. It was never about the individual but the overall team.

When we look at things closely we can see a global melting pot at Old Trafford where cultures merged to great effect within the Manchester United family. But Fergie also believed in using local talent, even if the majority of his bright young things had to eventually move on. He also used this fantastic ability to blend youth and experience together, something all companies can learn from in all areas of management. Local talent it would seem is always there, so a good scouting system is essential to this end.

It may sound simple, but when you analyse Fergie’s plan, this was based on sound common sense and the need to balance all the various units together with the team being all important and not the individual. Put all this together and it explains how this extraordinary cross cultural manager was able to bring so much success to the club, with one overriding factor. It took him three years to get the plan up and running, and as we all know, ongoing prosperity can’t be built overnight.

The same principles apply to business – if you are setting up shop in a foreign location, why send British, American or Europeans to man those offices? Locals understand what the locality needs – local managers, local employees and a local structure, supported by talent from abroad, will always triumph.