Localization of Brand Names for the Chinese Market

Last week, I was driving in my “swift panther” drinking a “Delicious and happiness,” when I realised I was hungry, so I opened up a bag of “happy event…” This sentence probably doesn’t make any sense to you. However, if you are Chinese, you know exactly what we are talking about!

On Shanghaiist.com, the fascinating topic of Chinese brand name translations by foreign brands is discussed.

Due to setting up in China, many multinationals have created Chinese names for their themselves, which results in… interesting new names when they are translated back to English, to say the least.

Did you know, for example, that the Chinese name of Marlboro translates to “10,000 treasure road” or the literal translation of Nike, pronounced Nai ke in Chinese, is “Enduring and Persevering.”

Westerners might laugh or even frown at hearing “Sparrow’s nest coffee” instead of Nescafé, but to the Chinese, these names don’t sound strange at all, Shanghaiist says. 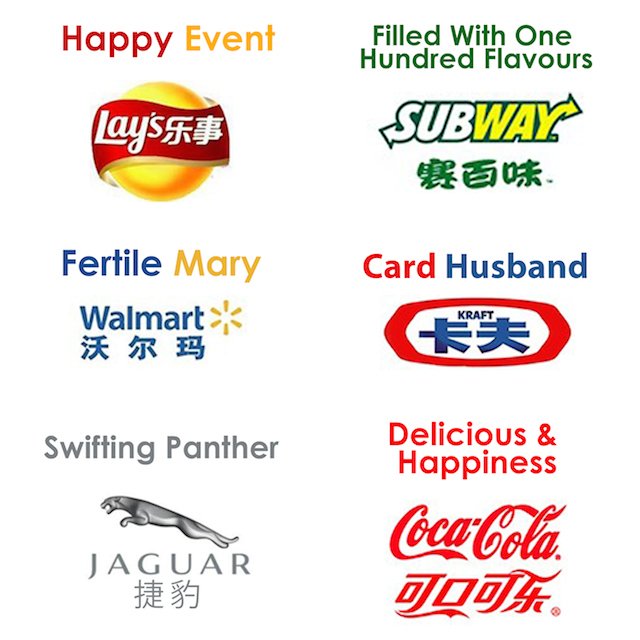 [Examples of brand names localized for the Chinese market.
Courtesy of Shanghaiist.com]

Research by Li & Shoostari revealed that  BMW is very popular among wealthy, female Chinese. According to the researchers, this can partly be explained by the company’s Chinese names:  Mercedes Benz’ Chinese name translates to “dashing speed,” which is regarded as more masculine, while BMW’s “treasured horse” has a more feminine connotation to the Chinese ear.

Of course, not every company hits the mark when choosing a Chinese brand name. Shanghaiist says.

Search engine Bing, for example, had a hard time to crack the Chinese market. Bing, when pronounced in Chinese, has the same sound as harmful words such as 毛病 (máo bìng), which means a fault, trouble, mistake, or defect, as well as病毒 (bìng dú), meaning virus or disease. Therefore, Bing needed a Chinese name that would avoid negative connotations the English name could arouse.Even though Bing has adopted another name in the country – that translates to “very certain to respond” (below) – the original brand name still lingers in the background.

And what to think of Best Buy, who opted for “Think 100 times before you buy?” No wonder the company has withdrawn itself from the Chinese market!

The translation, localization or adaptation of brand names for the Chinese, or any foreign, market is an intriguing part of globalization. It’s crucially important….and if you get it wrong…it can be devastating.

Check out some more examples of brands in China here.