Brazil has wasted no time in making its mark on the social media sphere as its huge population and growing internet space have combined to create one of the world’s biggest social media markets. With China’s citizens stuck behind a firewall, with no access to Twitter, YouTube and Facebook, and the U.S and Europe’s presence still pending, all eyes are on Brazil as it revolutionises the world of social media.

Second to the U.S, Brazil counts over 65 million Facebook users, and is the world’s second’s biggest user of Twitter, and outside of the U.S is the largest market for YouTube too.

So why is Brazil being branded “The Social Media Capital of the World”?

Let’s break it down through some key social media marketing facts with a little help from this infographic at Spotistic.

1) Twitter is growing so fast in Brazil that in 2013 Twitter launched operations in Sao Paulo. Twitter now has a marketing, business development and sales team in Sao Paulo. Almost all public figures, TV stars and football players are on Twitter. (Social Media Today)

2) Brazilians like to use social media while watching TV, in particular, soccer matches and soap operas. (Wall Street Journal)

3) Less than 17% of Facebook users ages 26 and older (a demographic estimated to represent 54% of Facebook’s user base in Brazil) said they enjoyed humorous content posted on brand pages. (Emarketer)

5) Brazilian TV Presenter Luciano Huck is the most liked celebrity on Facebook with 11973450 on his page. (Social Bakers)

6) A toy channel on YouTube called DisneyCollectorBR has the highest number of subscribers. (Social Bakers)

7) In early 2013, indigenous groups fighting a new hydroelectric dam under construction along the Xingu River turned to social networks to vent their frustrations. (Forbes)

8) Almost 77 percent of Brazilian social media users have a positive attitude toward shopping and buying on social networks. (Forbes)

9) Brazil ranks 7th in content uploading on Youtube and accounts for 3% of all worldwide uploads. (McKinsey and Co.)

10) 60% of Brazilians surveyed were okay if social media websites used personal information from their profiles to offer targeted ads. (McKinsey and Co)

…and here’s the infographic (thank you Spotastic) 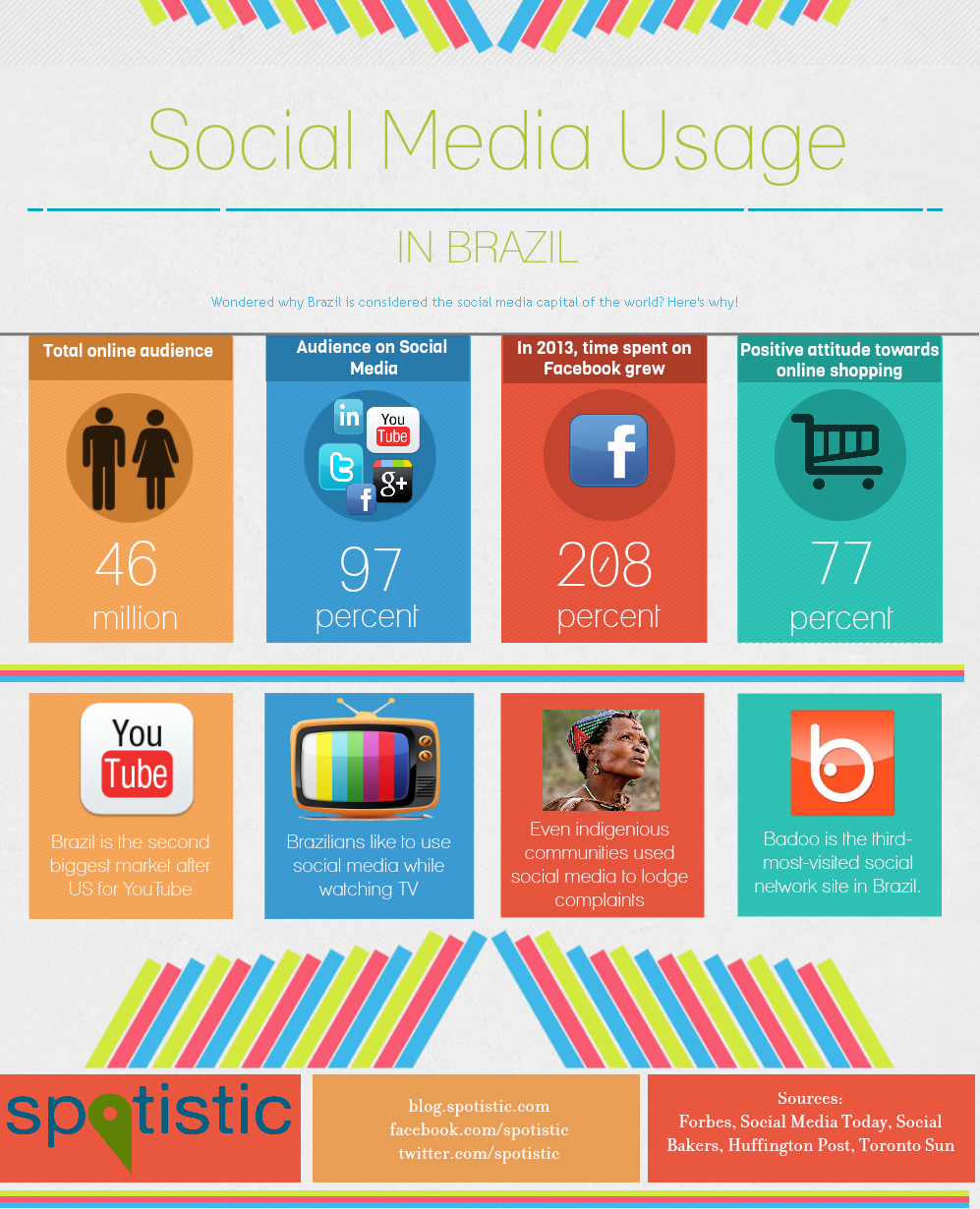